I have been to Cofoco twice, and both times I was quite happy with the food.

Their concept is fairly simple, but can still cause a bit of frustrations: Choose four dishes from a list for a fixed price, or chose as many dishes as you like a la carte and pay one price per dish (all dishes are the same price). Of course, this is a business, so they usually don’t include all the dishes I want in the four dish menu.

Both times, there were a few misses (for instance the first time the celeriac was extremely salty, and next time the apples and pears in the dessert had no flavour. ), but overall I was very happy with the food – especially considering the price: You pay either 85 kroner per dish or 295 kroner for four dishes from their list. Anybody who have been to top restaurants in Copenhagen know the price level here (usually minimum around €100 + wine for a Michelin star dinner). Due to portion size, three to four dishes seems appropriate. The food is a mix between traditional Danish and modern French, and it’s both creative, elegant, flavourful, well-cooked and nicely presented.

I particularly remember veal with pears being terribly good, and the cod was simply perfectly cooked.

Although the food is not up to the standards of Kokkeriet, AOC, and Herman, it’s definitely a place I would come back to, and I like Cofoco better than the Michelin restaurants Era Ora and Grønbech & Churchill (my reviews are also on here). I was also at the Michelin restaurant Relæ shortly after they opened (around a year and a half before they received their star, so maybe it’s completely different now), and I liked Cofoco a hell of a lot more than Relæ (which was only interesting – not good). Although Cofoco is not quite Michelin star level to me, they deserve a Bib Gourmand.

This was my third visit to Cofoco. Third time’s the charm, right? Well, they kept the standard from previous visits. 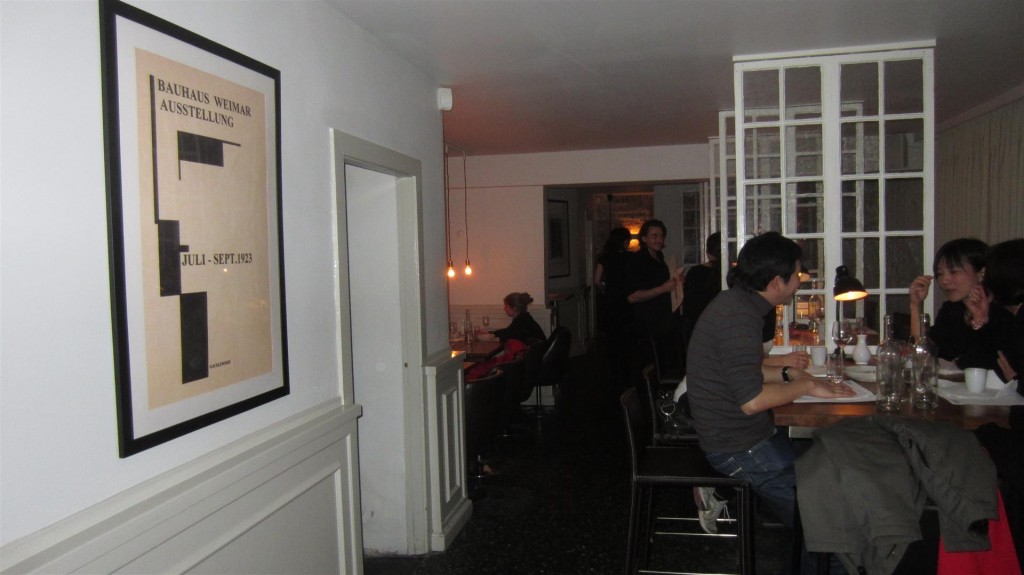 The price was now reduced to 75 Danish Kroner per dish (€10), and they recommend three to four dishes each. I went for four but on a good day might have been able to eat five.

I went for a glass of white wine and my wife at the time went for a red wine. When we stated our preferences, the waitress was easily able to give us recommendations. The white was 80 Kroner (€10.67) for a glass, the red wine 50 Kroner (€6.70), which both seemed very reasonable. A cup of coffee was 35 Kroner (€4.67).

We were also served a bit of bread with some dipping. 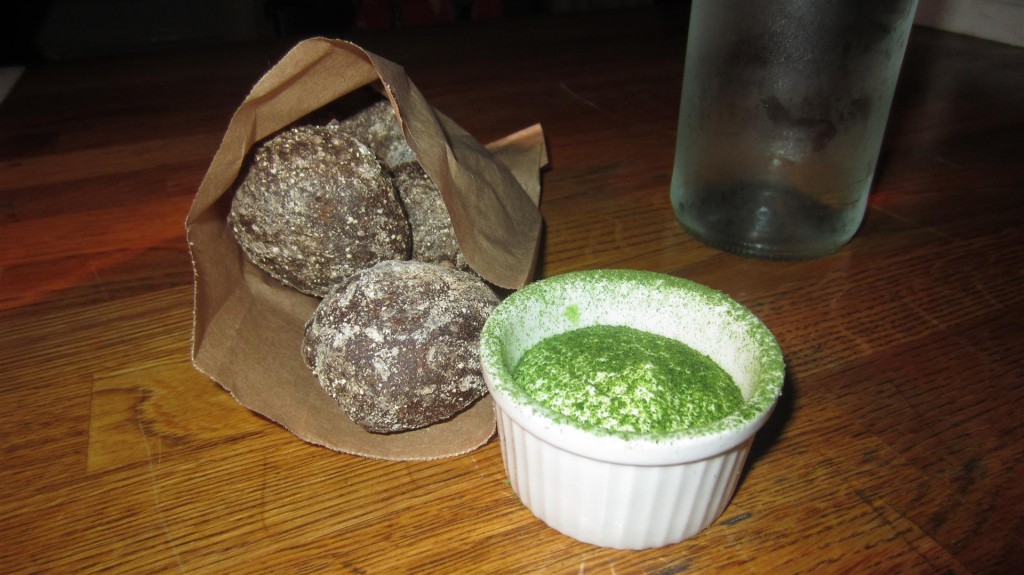 My first dish was grilled chicory lettuce with cured ham, pickled onions, garlic and a grated Danish cheese on top. It was with some trepidation that I ordered this dish, as I usually find chicory overly bitter. So what a lovely surprise, and how well this dish worked despite being so simple! 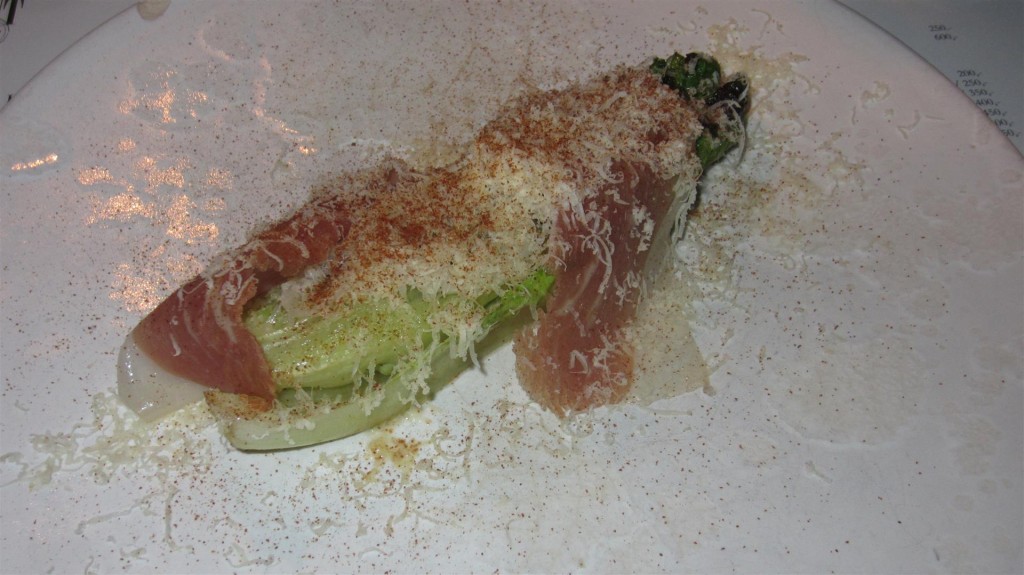 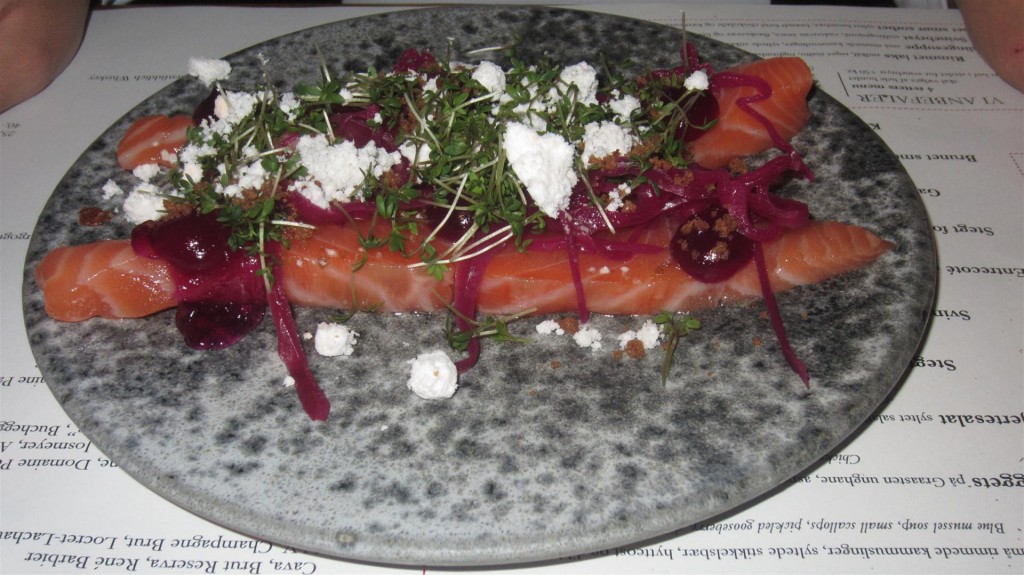 Next up I had turbot with pickled mushrooms, mushroom puree, crispy sago, and shiso. Beautiful fish and beautiful dish. Although the ingredients and the combination had been done before, then it was excellently executed – especially the fish. Along with my dessert, this was the highlight of the meal. 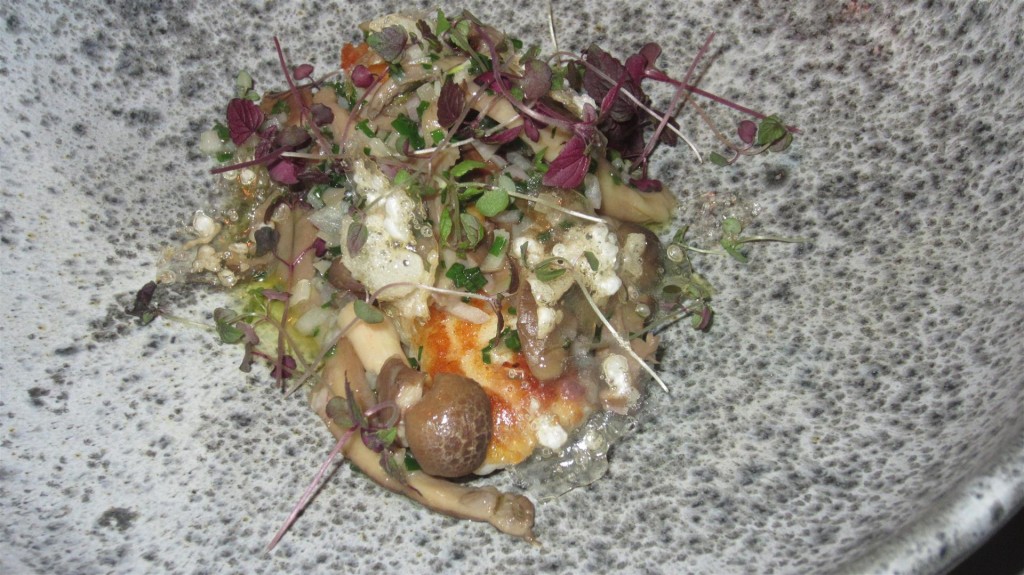 My then-wife had entrecote of Australian beef, which had a supplement charge, making it 125 Kroner (€16.67). It was served with baked Jerusalem artichokes, pickled red onions and a truffle sauce. When I tried this, I understand why the restaurant had opted for Australian beef, and not Danish, as it was very tender. Currently, most Danish beef is very chewy, unless you go for either the rump or the sirloin (the filet is chewy as well). The truffle sauce didn’t taste like much though – as usual, I’m tempted to say, as I’ve only had truly excellent truffles once (in Azurmendi). Nevertheless, a very nice dish as well. 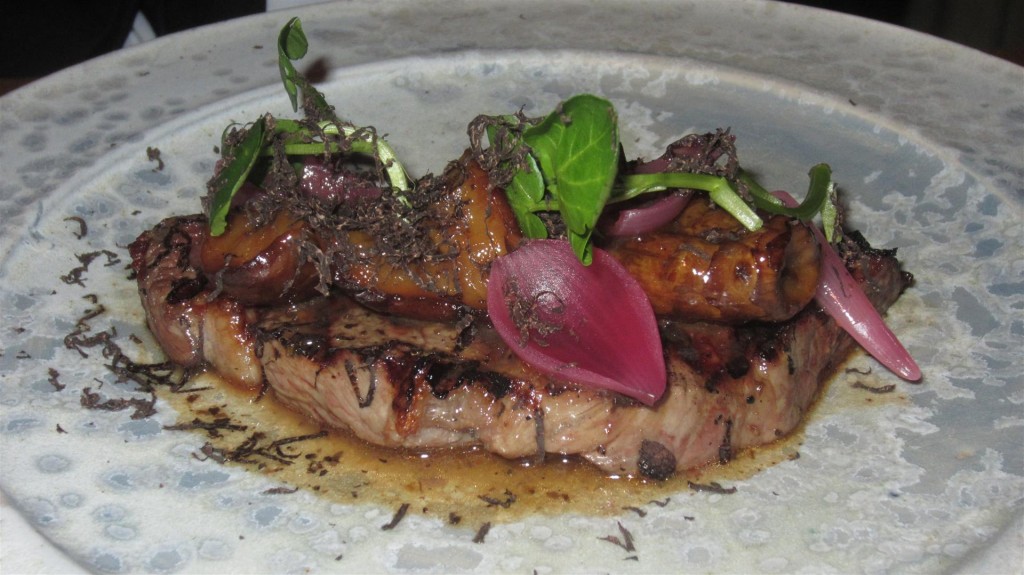 With an overall score of 7.5/10 I do feel there’s room for error, which came with the next dish, which was pork belly, root vegetable puree, vadouvan sauce, crispy pork rinds and watercress. The pork was a bit chewy, and it’s not until I wrote this review two months later and looked at my picture of the menu that I found out what those “caterpillars” were. The dish was served while I was in the toilet, so I received no explanation, but I assume it must have been the pork rinds. I couldn’t taste what it was, as it simply had no flavour. This dish wasn’t bad, but simply not successful either. 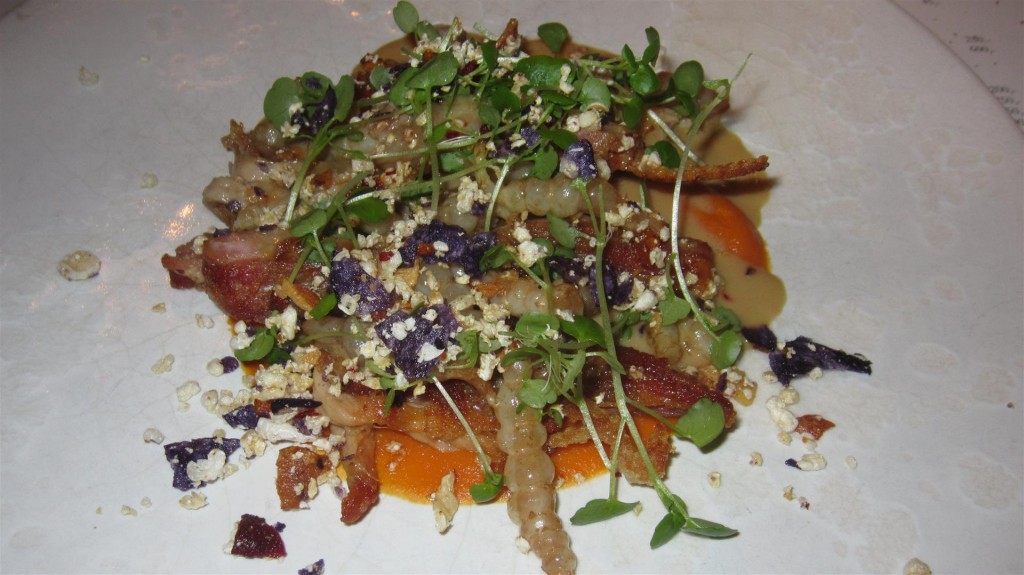 This disappointment was quickly erased from my memory, when I had my dessert: A sorbet made from browned butter, served with burned and crispy white chocolate, pickled blackberries and a butter milk soup. Lovely, lovely, lovely! Along with the turbot it was easily the highlight of the meal, and one of the best dishes that I’ve had in any of my three visits here. This dessert could easily have been served in a Michelin star restaurant. 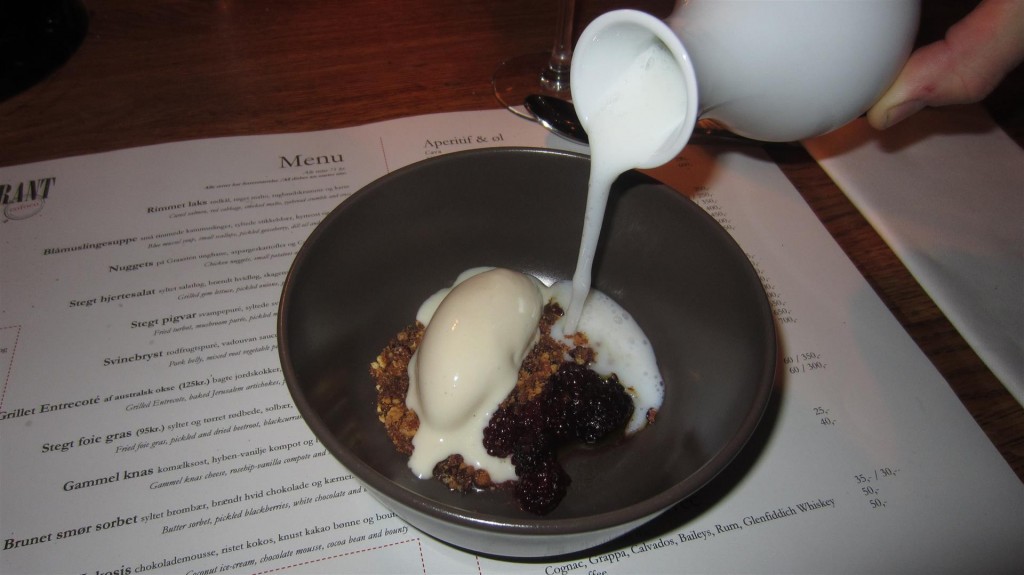 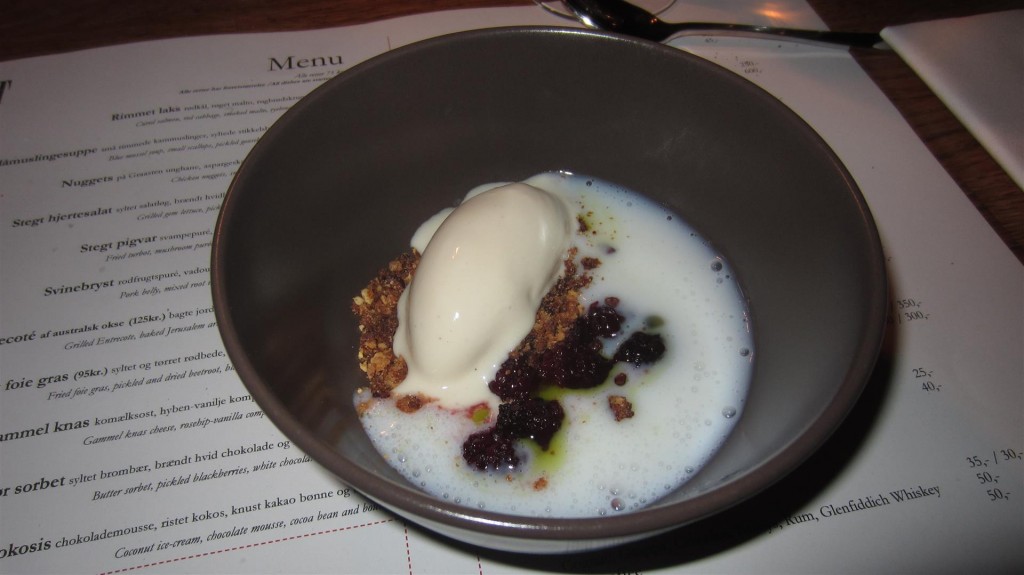 My then-wife’s dessert wasn’t quite in the same league – as it wasn’t quite as imaginative: Coconut sorbet, toasted coconut flakes, chocolate mousse, crushed cocoa beans, and Bounty bar. At least that’s what it said in the menu. Maybe they didn’t use actual Bounty bars but just made a coconut cream similar to the filling in a Bounty bar (hopefully the latter). Anyway, what was on the plate was well executed, but it seemed a bit plain to just have coconut and chocolate (basically a deconstructed Bounty bar), when I had such an imaginative dessert. 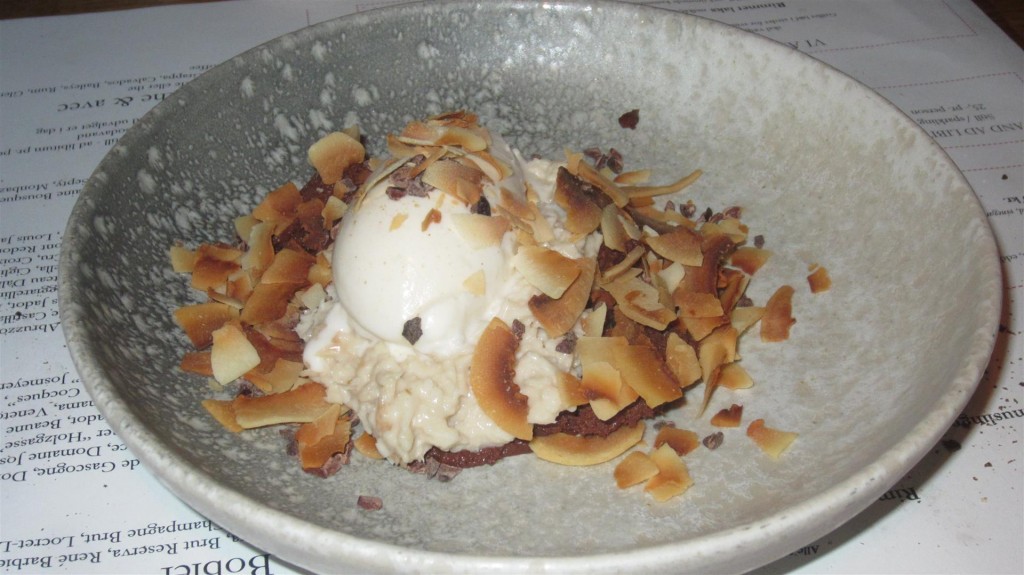 Despite the small bumps along the way, this was a very successful meal. And priced at 300 Kroner (€40) for four small dishes, it’s hard to compete with food of this quality. The reason I have been here three times is simply that it’s very difficult to find such good food for this price in Copenhagen. Although I haven’t been to many restaurants there yet, I have still yet to find a place in Copenhagen that surpasses Cofoco when it comes to value for money. As I’ve said before, they truly deserve a Bib Gourmand in the Michelin guide.

Just a short update this time, as we (four people) just had a short meal, so I’ll just show you some pictures: 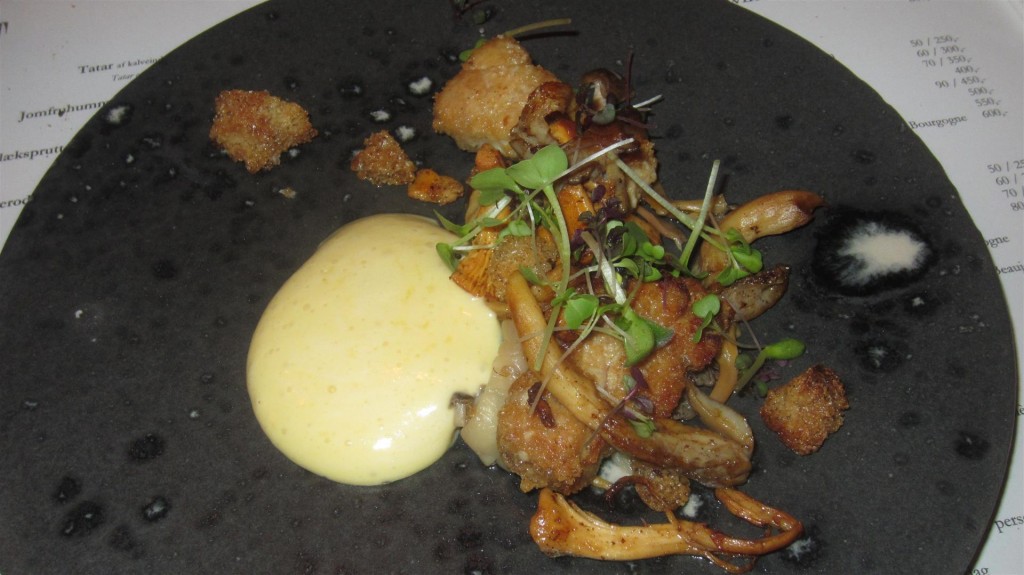 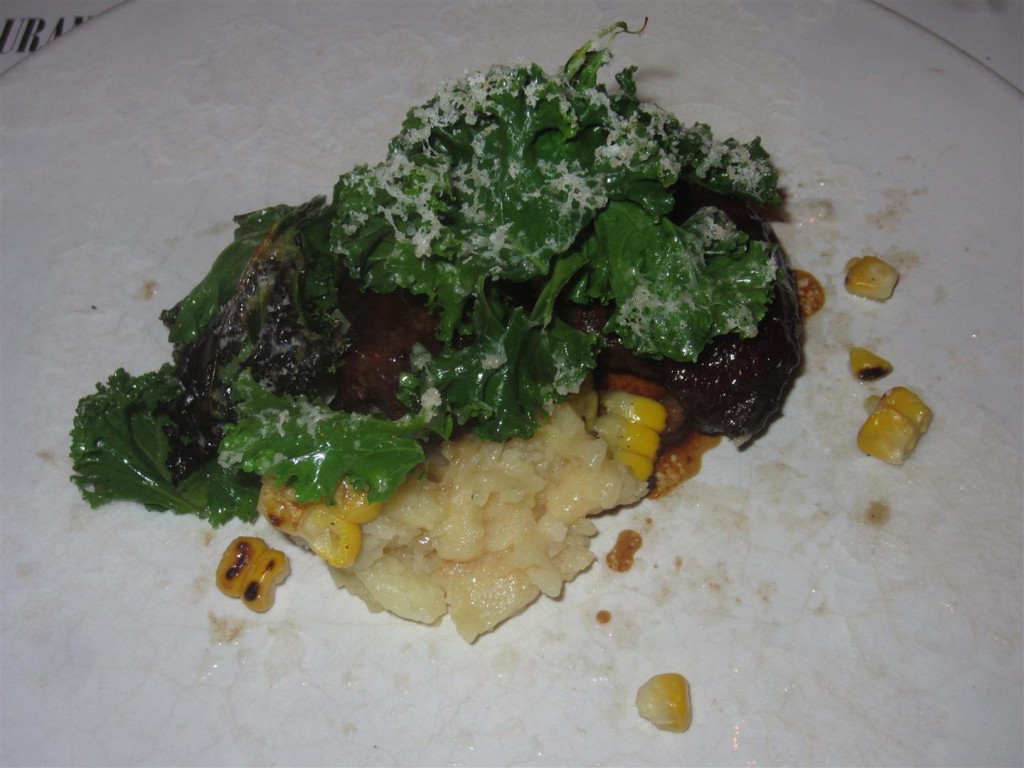 Apple sorbet (you could really taste the apples – it was like eating an apple), reduced cream with white chocolate, apple compote, crumble and warm caramel: 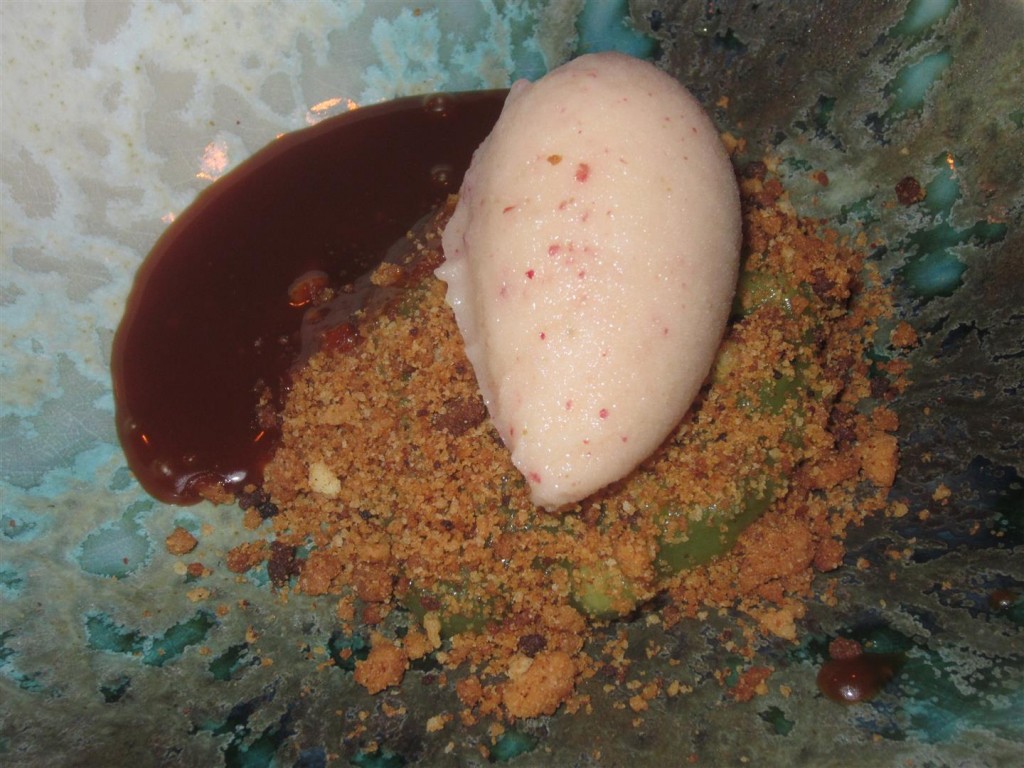 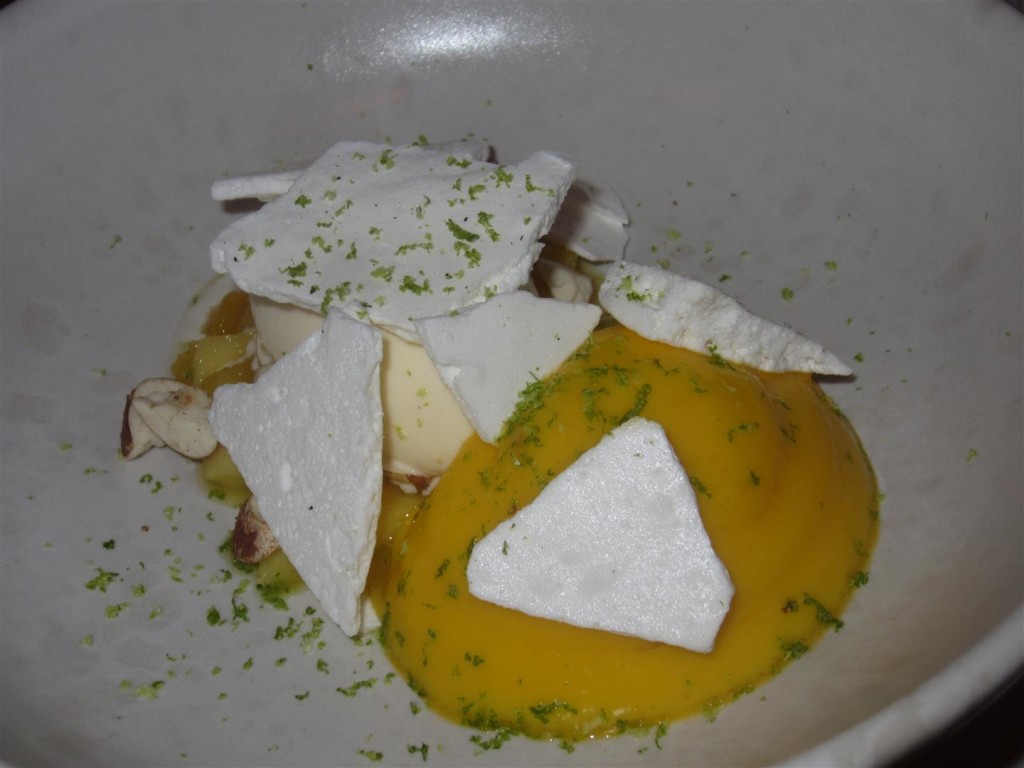 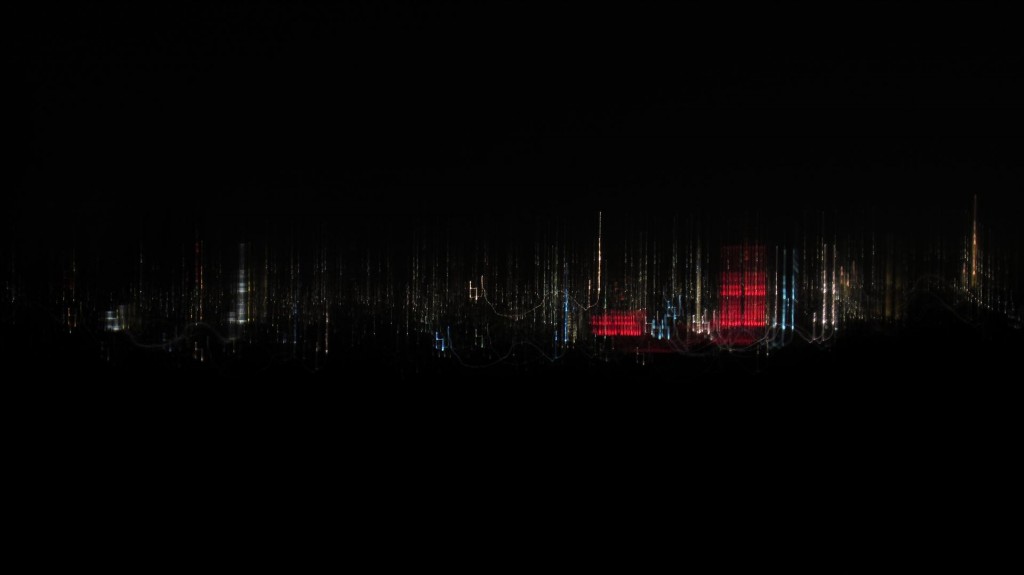